A full list of STWR's publications as well as related news, articles and blogs can be found below. You can filter the content using the 'category' or 'topics' links in the menu on the left. 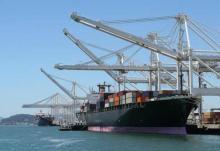 There are increasing warnings of an imminent new financial crisis, not only from the billionaire investor George Soros, but also from eminent economists associated with the Bank of International Settlements, the bank of central banks. 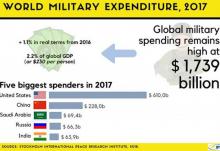 $1.7 Trillion Global Spending on Military in 2017: Highest since End of Cold War

According to the latest report by the Stockholm International Peace Research Institute (SIPRI), in total, countries around the world spent $ 1.739 billion on arms in 2017. Although there was a marginal increase of 1.1 percent rise in real terms on 2016, the total global spending in 2017 is the highest since the end of the cold war.

Tax evasion isn’t just for the west: it conspires to keep Africa poor too

A new report reveals how western banks and governments turn a blind eye to billions of pounds’ worth of wealth, generated across west Africa, that is squirrelled away offshore, often out of sight of the tax authorities. By Phillip Inman. 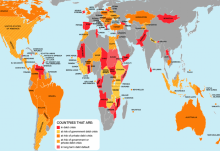 New figures show debt crises are growing across the globe

Thirty-one countries across the world are now in debt crisis, with a further 82 at risk, according to new figures released by the Jubilee Debt Campaign on 16 May. The figures are being released on the 20th anniversary of the G8 meeting in Birmingham (UK) 1998, when 70,000 people formed a human chain around the summit and called for unpayable developing country debt to be cancelled. 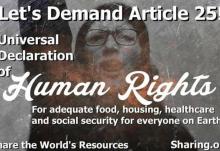 Throughout 2017 STWR continued to strengthen and promote our case for global economic sharing, particularly in relation to our core advocacy position as an organisation. All of our work related to the need for a united people’s voice that speaks on behalf of the least advantaged, giving the highest priority to the prevention of extreme human deprivation across the world.