A trade agenda for the people 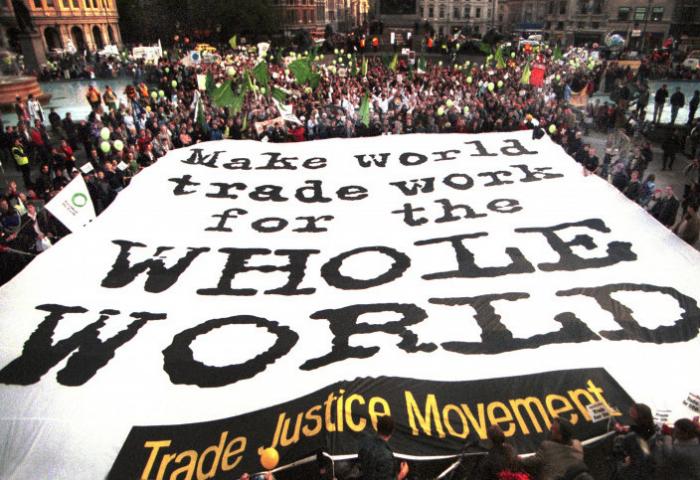 While the USA and China are stepping into one the potential biggest fights on trade measures in decades, Friends of the Earth Europe is presenting concrete proposals for an innovative trade agenda that serves citizens and the environment.

The paper Setting course for sustainable trade – a new trade agenda that serves people and the environment provides a fresh analysis of globalisation and trade agreements, and lists building blocks for a radical shift in EU trade and investment policy and treaties.

Many rules governing trade and investment today hinder efforts to achieve more sustainable economies. We urgently need a new trade regime which can help address global challenges and tackle problems like accelerating climate change, a broken agricultural model and loss of trust in democratic processes, rather than aggravating them.

Some key proposals for a fair and sustainable trade system outlined in the paper:

Mute Schimpf, food and trade campaigner, said: "We call on the European Commission, the European Parliament, national governments and parliaments to radically change the direction of trade and to put sustainability and equity at the heart of European trade policy. Until this happens, new unfair and unsustainable trade agreements – whether already concluded or still under negotiation – should be rejected. Only with this kind of fundamental change in how Europe trades can we construct a more democratic, fair and sustainable Europe."

Report: Justice for people and planet
The report ‘Justice for People and Planet’ shows how corporate power has been used to repeatedly abuse and violate human and environmental rights, written...
Article: Farming for a small planet
What model of farming can end nutritional deprivation while restoring and conserving food-growing resources for our progeny? The answer lies in the...
Article: The rising global movement that calls for #noTTIP
TTIP is the latest bid to capture policymaking by the profit-making interests of the 1%, with dire implications for anyone who upholds a vision of a more...
Report: A new, climate-friendly approach to trade
We urgently need a new approach to trade that prioritizes the needs of people and planet. This discussion paper by the Sierra Club asks the question: What...
Printer-friendly version