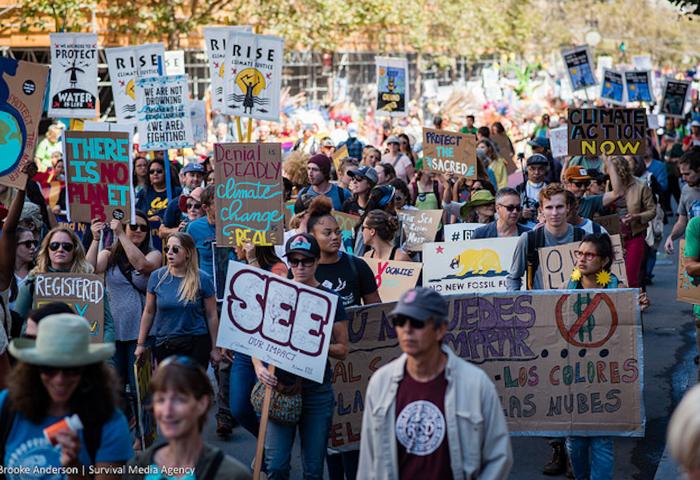 This weekend over 250,000 people took part in more than 900 actions in 95 countries. The Rise for Climate mobilizations demanded political action to keep fossil fuels in the ground and deliver a swift and just transition to 100% renewable energy for all.

People have delivered clear demands to elected officials and decision-makers as they head into a series of important summits and negotiations to fix the climate crisis later this year. One month before the official release of the IPCC special report on 1.5°C and the upcoming United Nations climate change conference in Poland (COP24), activists have made clear that concrete steps are needed to quit fossil fuel production and slash emissions by 2020 as the only way to avert the worst case scenarios of climate change.

Hundreds of thousands of people found creative and powerful ways to voice their concern for the state of the planet and to call for an end to fossil fuels and a worldwide transition to renewable energy before 2020:

Blog: The climate crisis is here - and time to act is running out
To unlock the needed ambition at the latest climate negotiations in Bangkok, each country must undertake its fair share of action – based on both their...
Report: The intersection of politics and spirituality in addressing the climate crisis
The following interview with STWR’s founder, Mohammed Sofiane Mesbahi, examines both the contemporary political and profounder spiritual implications of...
Blog: The coming wave of climate displacement
Governments around the world are engaged in a series of talks that could alter how the movement of people across borders is managed. One dialogue is...
Blog: No money, more problems as U.N. climate talks close in Bonn
United Nations climate change talks edged slightly closer to completing the Paris Agreement Work Programme, including guidelines on how to put the...
Printer-friendly version