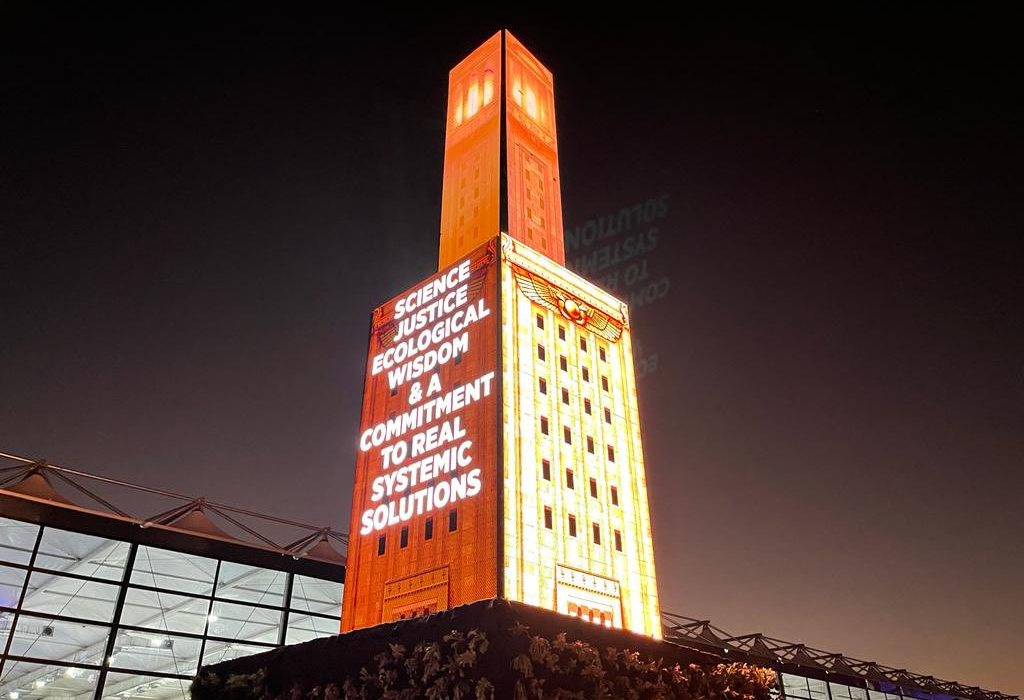 As world leaders gather this week in the Egyptian city Sharm El-Sheikh for the United Nations Climate Change Conference, the Climate Clock team is using various displays as reminders of a looming deadline and just how much high-polluting nations owe the Global South. By Jessica Corbett at Common Dreams.

The Climate Clock team has installed displays in major cities around the world—including Berlin, New York, Seoul, and Rome—as well as distributed portable "action" clocks and created a digital clock that organizations can add to their websites.

At the COP27 summit in Egypt, the Climate Clock tower highlights that humanity has less than seven years left to limit global heating to 1.5°C, the more ambitious Paris agreement target agreed to at COP21 in 2015. The installation also presents figures for loss and damage funding based on research from the Center for Global Development (CGD).

Loss and damage—or the costs incurred by the nations that have contributed the least to the climate emergency but are disproportionately enduring its impacts—is a key topic at the conference.

The COP27 display declares that the Group of 20 (G20)—made up of 19 major economic powers plus the European Union—owes $31.8 trillion in loss and damage funding. Of that total sum, Group of Seven (G7) nations, or the world's largest advanced economies, owe $12.3 trillion.

"The Climate Clock's loss and damage calculation is far larger than what is currently being discussed at COP27 negotiations," said Ian Mitchell, a CGD senior policy fellow and lead author of the study that informs the displayed figures, in a statement Thursday.

"Traditional figures tend to focus only on the damage from individual extreme weather events, or relate only to annual climate finance commitments from developed countries," he explained. "But our new estimates take into account the full scale of the damage that emissions will cause."

At the COP15 summit in 2009, developed countries agreed to put $100 billion annually toward climate action in the Global South by 2020. However, by that deadline, only $83.3 billion was mobilized, and the goal amount—widely called inadequate—isn't expected to be hit until 2023.

Carbon Brief calculated earlier this week that if the United States—the largest greenhouse gas producer in history—were to give its "fair share" toward that $100 billion annual pledge, the figure would be nearly $40 billion, or over $32 billion more than the $7.6 billion it gave in 2020.

"Negotiators from wealthy nations are debating whether to pay $1 billion over here or over there, when the actual amount of loss and damage that they rightfully owe to impacted nations is closer to the order of $30 trillion for G20 countries," noted Climate Clock co-creator Gan Golan. "And it's rising every day. The world needs a big shift in perspective."

Fellow Climate Clock co-creator Andrew Boyd declared that "wealthier nations have a moral and financial obligation to repair the loss and damage their high emissions have inflicted on the 'developing' world."

"With the U.N. predicting a billion climate refugees by 2050 if we fail to act in time," he added, "helping the most vulnerable nations transition to a sustainable economy is not just the right thing to do, it's the smart thing to do."

In addition to the tower, the Climate Clock team is working with activists from across Africa to deliver handheld displays to key officials, including the U.N. Framework Convention on Climate Change leader and the COP27 president, to demand that they "#ActInTime on our less-than-seven-year deadline and make dramatic progress on key climate solutions, including renewable energy, Indigenous sovereignty, and loss and damage financing."

Loss & Damage Youth Coalition coordinator Ineza Grace, who is based in Rwanda, asserted that "we need finance to address loss and damage, especially for the frontline communities in Africa and elsewhere that are most vulnerable and did the least to contribute to the climate change we are living right now."

"What's currently on the table at COP27 for loss and damage is a tiny fraction of the total solution, so negotiators need to stop arguing over relatively small amounts and start moving resources towards just transition, adaptation, and mitigation immediately," stressed Ntokozo Moloi, Climate Clock campaigns director. "We have less than two weeks here to agree to it, and less than seven years to get it all done. We have no time to waste."

Report: Rich countries falling billions short on ‘fair share’ of climate-finance goal
The US should be paying nearly $40bn towards the $100bn climate-finance target, new Carbon Brief analysis shows. This is $32bn more than the estimated $...
Report: Extreme hunger has more than doubled in the world’s worst climate hotspots, says Oxfam
In a new report on the impact of climate on food supply, Oxfam found a 123 per cent rise in acute hunger in the 10 countries with the highest number of UN...
Blog: Climate collapse is not inevitable but ‘great leap’ needed
To bring about a 'Great Leap' scenario, it is necessary to address the fundamental inequalities that are the root cause of the ecological crisis, writes...
Article: Civil society blasts lack of progress at Cop26 during final day
Activists and civil society representatives have accused rich nations at COP26 of a "shameful" lack of ambition. Reported by Leftfootforward.org
Article: Fossil fuelled foreign policy: Why COP26 flopped
With continuing hypocrisy and obstructionism by governments of major countries at global climate talks, humanity’s best hope lies in the social movements...
Printer-friendly version