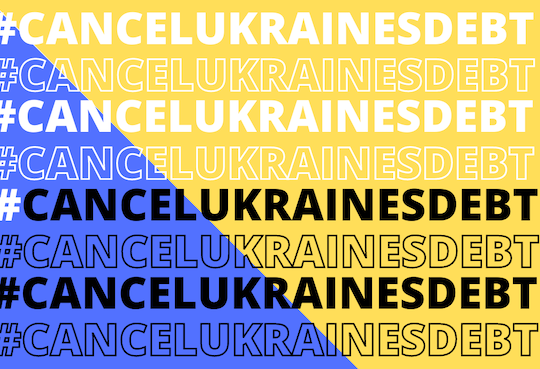 Putin’s war underlines just how urgent debt cancellation is. When the fighting ends, Ukraine will need a modern-day Marshall plan - made up of grants, not a reconstruction financed by loans, writes Owen Jones.

A bloodied man empties his wallet to his creditor while being mercilessly attacked by an unprovoked assailant. This is the plight of Ukraine, which recently made a scheduled interest payment to private lenders as tanks rolled over its land and missiles struck its cities. Even before Vladimir Putin started bombing apartment blocks and maternity hospitals, Ukraine was Europe’s poorest country as measured by GDP per capita – significantly poorer than Albania. Yet this war-ravaged country is saddled with unsustainable debt – and as the piles of rubble grow, so do the repayments. That’s debt for Ukraine, but profits for western hedge funds. War, for some, is the ultimate money-spinner.

Since Russia annexed Crimea in 2014 – triggering a conflict in the east that had claimed thousands of lives before the current invasion – Ukraine has been forced to borrow $61bn (£46bn) from external lenders, according to calculations by the Jubilee Debt Campaign; a small sliver has been paid off, but what remains represents about a third of the country’s total economy. Ukraine was due to cough up $7.3bn this year alone – more than its annual education budget. For a rich country blessed with peace, that would be manageable, but Ukrainians are poorer today than when the Soviet Union collapsed three decades ago. At least $100bn worth of damage has already been inflicted to infrastructure – from roads to bridges, hospitals to schools – and, as you read this, that figure only mounts. Yet almost all of the financial assistance being given to Ukraine is in the form of loans. Precious funds will be diverted from rebuilding a shattered country, instead filling the coffers of the International Monetary Fund (IMF), World Bank and private bondholders.

Putin’s barbaric siege of Mariupol underlines just how urgent debt cancellation is. While the Russian army seeks to starve and bomb it into submission, the city increasingly suffers the fate of Grozny during the second Chechen war: razed to the ground, piece by piece. It is macabre but necessary to state that Mariupol’s present state may well be the future of other Ukrainian cities. Each day, billions are added to Ukraine’s reconstruction bill: it would be pure cruelty to expect this to be repaid as debt.

That’s why Ukrainian civil society organisations have launched a petitiondemanding Ukraine’s debt is cancelled. They note, too, that much of the supposed assistance given to the country has been accompanied by strict conditions: the IMF calls it “economic restructuring”, but it’s more honestly described as the imposition of free-market dogma, resulting, for instance, in a 650% surge in household gas prices since 2014. “Previous governments had two options: either to fairly tax the fat cats and bring them out of the shadows, or to borrow from the IMF and others,” Ukrainian economist Oleksandr Kravchuk told me. “They chose the latter.”

The Jubilee Debt Campaign has taken up this demand and begun to lobby MPs in Britain. Like millions of us, executive director Heidi Chow had that gnawing, helpless sense of “we’ve got to do something”. For some, that manifested itself in the demand for a no-fly zone. But in practice, that could lead to a direct confrontation with the Russian military, which could in turn easily escalate into nuclear war. In contrast, this is a tangible and hugely impactful proposal with no risk of military escalation.

So why hasn’t this commonsense demand been taken up by the powerful? In part, perhaps, it’s because Ukraine’s own government hasn’t officially called for it, although some high-ranking officials have. “They were quite keen before the war to pay debts and push forward their standing in Europe and the world,” suggests Chow. Applying for any form of debt relief is a complicated and drawn-out process. Any fears that their ability to borrow and their global reputation may be damaged clearly need alleviating.

Yet the grisly fact is that as yet more loans are granted – even though now without conditions – vast profits are to be made. Ukrainian bonds are trading at about 25 cents on a dollar, and so if repayments continue, hedge funds and banks are set to make profits of more than 300%. That the profit margins of the already obscenely rich are being inflated by the bloody slaughter of civilians should surely be a cause of universal revulsion – and sufficient impetus to action.

But if the IMF and World Bank cancel Ukraine’s debt, critics may ask, doesn’t that mean less money in the pot to lend to other poorer countries? But there’s a straightforward solution: richer countries, like our own, should contribute more to make up the shortfall. There is a precedent of sorts – the G20’s debt service suspension initiative suspended or cancelled nearly $11bn of poorer countries’ external debt because of Covid-19. If a pandemic is reason enough to write off debt, surely a war of aggression is too.

When this all ends – hopefully in failure for Putin – then Ukraine will need a modern-day Marshall plan, made up of grants, not a reconstruction financed by loans. In terms of the current moment, as the Jubilee Debt Campaign suggests, there should be a mechanism to automatically suspend debt repayments for countries suffering severe external shocks. Ukraine is in the midst of existential crisis – as the Ukrainian social scientist Volodymyr Ishchenko told me: “Personally, it feels like the country in which I was born may simply disappear.” A country battered and bruised by war needs space to breathe. That’s in our power: cancel the debt.

Owen Jones is a Guardian columnist.

People around the world demand to cancel Ukraine's unjust debt

News: Covid pandemic has pushed poor countries to record debt levels – World Bank
The Covid-19 pandemic has led to a “tragic reversal” in development and pushed debt in poor countries to record levels, the head of the World Bank has...
Report: More than 100 countries face spending cuts as Covid worsens debt crisis, report warns
More than 100 countries face cuts to public spending on health, education and social protection as the Covid-19 pandemic compounds already high levels of...
Report: Adding fuel to fire: How IMF demands for austerity will drive up inequality worldwide
A new briefing paper by Oxfam shows that the International Monetary Fund is systematically encouraging countries to adopt austerity measures once the...
Report: Global austerity alert: Looming budget cuts in 2021-25 and alternative pathways
A new global study sounds an alert of an emerging austerity shock: most governments are imposing budget cuts, precisely at a time when their citizens and...
Article: Rights not debts
The harms to human dignity caused by over-indebtedness — whether individual or public — are a consequence of unjust policies which violate human rights....
Printer-friendly version