To salvage multilateralism we need a Global Green New Deal 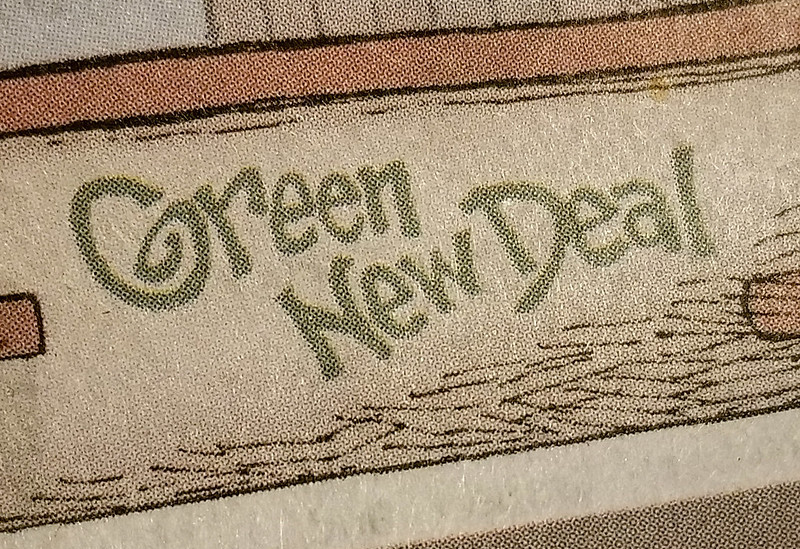 It's time to reclaim the policy space lost to footloose capital by creating a new public realm at the global level, writes Richard Kozul-Wright for openDemocracy's Oureconomy.

This week in Washington, the international community will be recalling the achievement of their forebears who, seventy five years ago, with the fight against fascism all but won, laid the grounds for a post-war multilateral economic order. But with today’s multilateral system in crisis, what should they be celebrating?

The aims of the Bretton Woods agreement were set out by the United States Treasury Secretary Henry Morgenthau to the House Banking and Currency Committee in March 1945. Morgenthau needed the backing of law makers to get the agreement through Congress and he was careful to frame his case as good for American businesses and households. But he was in no doubt that what was ultimately at stake was “world security and the development of the world’s resources for the benefit of all its people”.

Achieving that would require multilateral financial mechanisms to stabilise currency movements and control volatile capital flows and multilateral development funds to boost productive investment. Morgenthau insisted that countries would be given the requisite degree of economic independence – policy space – to ensure that governments could make good on their promise of full employment and would cooperate more closely to eliminate the aggression and bullying that accompanied “power economics”.

Banking interests were outraged by these new rules of the game and began to push back. From the late 1940s, they enjoyed a more sympathetic political hearing and conspired to circumvent the new rules, but the system held firm. However, from the late 1960s, under the ineluctable logic of the Triffin paradox and a series of economic shocks, it began to buckle.

At the end of the 1970s, the election of a new British prime minister (versed in the logic of Friedrich Hayek’s The Constitution of Liberty) and the selection of a new head of the Federal Reserve, (intent on the “controlled disintegration” of the existing international monetary system) paved the way for a new order. With the arrival in the White House of a kindred spirit, government action was no longer seen as the solution to economic problems, government action was the problem. The attrition of the public realm went global.

While economic ideas were the spark plug of this neoliberal project, the newly liberated financial sector was its engine. Setting capital free from regulation and public oversight opened up huge rent-seeking opportunities for an energized banking sector, while a new set of trade rules (covering financial services, investment and intellectual property rights) extended greater protections to footloose capital.

Volcker’s successor at the Fed, Alan Greenspan, had no doubts that the liberation of capital combined with innovative financial products would turbocharge the global economy. This, he claimed, was Adam Smith’s invisible hand working at the international level – “unregulated global markets do clear” he opined, and “with rare exceptions, appear to move effortlessly from one state of equilibrium to another”.

Things did not turn out quite as smoothly as Greenspan anticipated. Beginning with the Savings and Loans crisis in the United States, boom and bust became a recurrent feature of the new order, culminating, in 2008, in the deepest economic crisis since the 1930s, and revealing – including to Greenspan – the darker side of a world driven by private credit creation, underregulated banks and financial chicanery.

With markets in freefall, government, it turned out, was the solution to the problem. And both separately and collectively (through the G20) public resources were mobilised on an unprecedented scale; financial institutions were saved, markets stabilized and economies righted. The era of greed was pronounced over and a new set of norms and priorities was promised to tackle the inequities and insecurities of hyperglobalization.

But money still talks and governments have apparently lost their financial voice. The rules of the economic game have remained largely intact and in a dramatic reversal of fortune, the overlords of mass financial destruction are not only back to their old rent-seeking ways but are now being asked to avert mass environmental destruction and deliver the SDGs.

This is not only wishful economic thinking, it will – if history is any guide – make for a more unequal and unstable world. The only way to deliver the public goods needed to achieve sustainable and inclusive development is to create a well funded, democratic and inclusive public realm at the global as well as the national level.

What is needed is a Global Green New Deal that combines environmental recovery, financial stability and economic justice through massive public investments in decarbonising our energy, transport and food systems while guaranteeing jobs for displaced workers and supporting low carbon growth paths in developing countries – which is where the climate battle will be won or lost – through the transfer of appropriate technologies and sufficient financial resources.

With that in mind, and in the original spirit of Bretton Woods, restoring “faith in the wisdom and the power of Government” should be the first order of business at this week’s celebration, accompanied by serious discussions of ways to reclaim the policy space lost to footloose capital and to refashion the mechanisms of international cooperation and policy coordination with inclusion and sustainability as their mission. That would be a party to truly honour the founders of multilateralism.

Filed under:
Environment, Finance and debt

Article: If America can find $716bn for the military, it can fund the Green New Deal
At long last the political debate in the world’s richest country is vibrant with proposals that would help the most vulnerable in our society. And what do...
Article: The meaning of the Green New Deal
The Green New Deal strongly affirms the need for more equity and social justice, and the fact that these principles are being presented and endorsed by...
Article: Only a global Green New Deal can save the planet
The Sanders plan for a Green New Deal recognizes that unprecedented international cooperation will be needed—with the US doing its fair share—if we’re to...
Blog: The 'green new deal' supported by Ocasio-Cortez and Corbyn is just a new form of colonialism
In the new energy revolution, we risk perpetuating the belief that rich countries are entitled to a greater share of the world’s finite resources...
Printer-friendly version