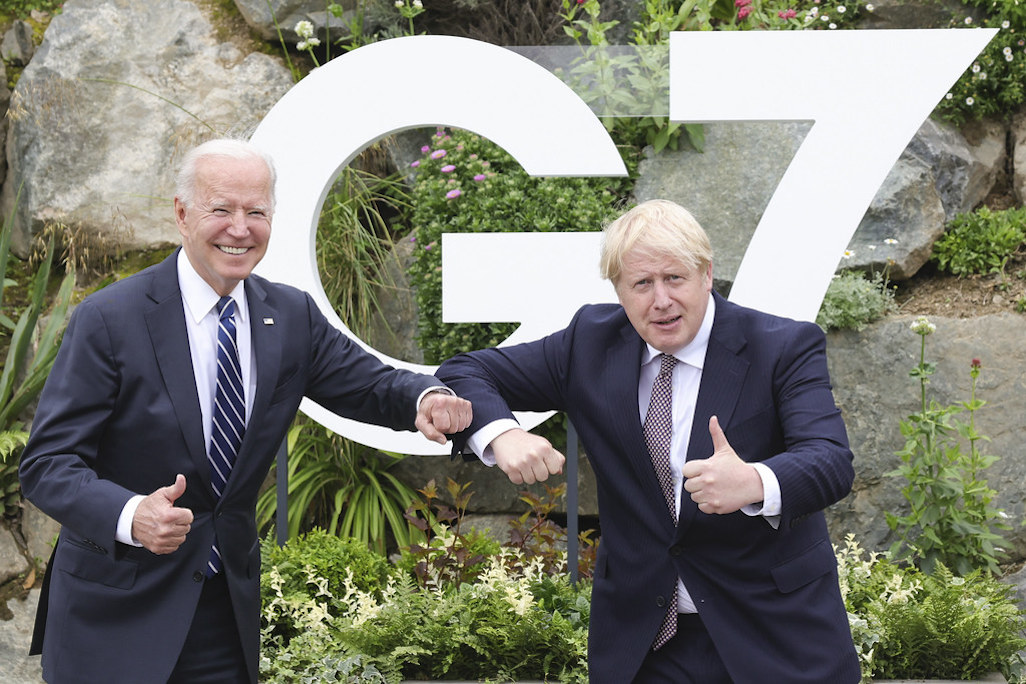 How the G7 continues to stand in the way of a more democratic international order - by Nick Dearden for the New Internationalist.

Earlier this year, South Africa’s delegate to the World Trade Organization made an eloquent plea to rich countries to stop blocking a proposal which would see patents on Covid-19 vaccines and treatments put aside. The idea, backed by the vast majority of the world, would allow countries like South Africa to start producing vaccines, massively ramping up global production without the need for licenses from the big pharmaceutical corporations that control those medicines.

Countries like Britain lectured delegates from the Global South on the need to respect intellectual property, and promised that the problem of unequal vaccinations could be much better solved by an injection of charitable funds. South Africa’s delegate replied frankly, stating that ‘The problem with philanthropy is that it cannot buy equality.’

At this weekend’s G7 summit, we will see similar dynamics at play. We have already seen some announcements about donating ‘surplus’ vaccines but the numbers are insufficient and will not challenge the stranglehold of gigantic monopolies over the medicines we all need. What will be entirely absent from the G7’s discussion is equality. That shouldn’t surprise us, after all, the G7 was created as a forum to allow the wealthiest governments in the world to lay down the rules of the global economy, in their own interests.

The G6, a forerunner to the G7 group, first met in Rambouillet in 1975 amid an economic crisis and a political threat. Economically, the West was being hit by inflation and unemployment, triggered in particular by a hike in oil prices as the Middle East which had turned off the supply of their most lucrative commodity.

Meanwhile former colonies across the Global South had seen that political liberation from empire had only got them so far. As long as the international economy was still controlled by the old imperial powers, the possibility of remaking your country was severely constrained. And so these countries, came together as part of  a non-aligned movement, and started to fight back, demanding a more democratic global economy in which big business and big finance would be constrained, producers of commodities would get a fairer share of global income, and important technologies would be shared for the benefit of all. In 1974, this group got a far-reaching proposal for economic reform known as the New International Economic Order approved by the UN’s general assembly, outraging the West.

The G6 was part of a counter-attack on this project for a more just world. The UN’s refusal to embed the interests of the richest, meant that it had to be marginalized. Strategic economic decisions were moved to the closed rooms of a privileged political class.

In the coming years, fuelled by a debt crisis that spread from Latin America to Africa and Asia, the power of nations in the Global South was undermined, and a form of extreme free market capitalism was unleashed, with power centred on the financial markets of the richest countries. The G7 oversaw this new world order of neoliberalism.

True, at times the G7, sometimes joined by post-Soviet Russia as the G8, had to respond to public outrage, dolling out enough charity to maintain the status quo. For instance, the 2005 G8 in Scotland, saw large scale debt cancellation packages and promises to ramp-up foreign aid budgets.

Over the last four decades, more and more decisions in our society have been turned over to big business. The resulting inequality has damaged social cohesion to a breaking point. The obsession with short-term profit has brought us to the brink of runaway climate change.

The extreme inequality in vaccine rollout around the world has been the latest symptom of this problem. While G7 nations are vaccinating their citizens at a rate of 4.6 million people a day, low income countries can only manage 63,000 vaccinations a day. The G7 will have vaccinated almost all its citizens by the end of the year, but at current vaccination rates, low-income countries would be waiting 57 years for everyone to be fully immunized.

COVAX, the body supposed to ensure fair and equitable access to vaccines, has been hamstrung as G7 countries scrambled to buy up every vaccine on the market, leaving most of the world with none. As it stands, COVAX will be lucky to vaccinate 10 per cent of global-south countries (excluding India) this year.

There are structural solutions to this problem – including overriding the Big Pharma monopolies that are preventing the open sharing of the know-how behind these vaccines. South Africa and India have been calling for this since November. The G7, now with the very notable exception of US president Joe Biden, have stalled even discussion of this issue in the World Trade Organization.

Unfortunately, the problem extends well beyond vaccines. Many countries in Africa, Asia and Latin America were already suffering a massive debt burden before the pandemic struck and   Covid-19 tipped many into a full-blown crisis. While some ‘relief’ has been given, almost nothing has been cancelled, and the banks and hedgefunds continue to drain billions of dollars a year from countries across the Global South – money their governments need to fight the pandemic, to recover, and to protect their citizens.

The G7 is likely to endorse debt relief schemes – kicking the problem down the road by a few months – they will do nothing to force the financiers to take the hit for their own reckless lending, let alone restructure the global financial system which, in the words of even the World Bank’s president, resembles a ‘debtor’s prison’ for many.

It’s true that there has been an impressive breakthrough in the form of the US proposal to set a minimum corporate taxation rate around the world. This is significant, but it’s currently set far too low, and there are fears it will benefit the G7 more than anyone else. The British government are even trying to exclude the City of London from the rules.

That’s before we get to the issue of climate change, a crisis which has emerged from a global economy which puts short-term profit above every other consideration – even the ability of human beings to continue to live on our planet. We must transform the way the global economy works if we’re to prevent runaway climate change – fundamentally rethinking the way we produce and trade, and challenging the power of profit-seeking monopolies over our lives.

We certainly need to redistribute wealth to help others adapt in a world where we can’t use fossil fuels anymore. $100billion a year was the figure pledged to developing countries many years ago for this purpose, and of course we’ve reached nowhere near that level. While the G7 are likely to put some funds on the table, it won’t be close to what’s needed, and will fail completely to make the necessary structural reforms to deal with this existential threat.

The lead up to the G7 has, however, shown us something interesting – that people power can work. Few would have expected some of the most important proposals to emerge from the most powerful country – the United States. But on both vaccines and of taxation, Biden has begun to challenge fundamental aspects of the monopoly economy. Of course there is an element of enlightened self interest here. Like Franklin D. Roosevelt before him, Biden seems to understand that global capitalism and US power require different rules, and heavier state intervention, for their own good. Like Roosevelt too, Biden is being pushed by an increasingly left-wing Democratic Party and wider movements in US society.

Some of Biden’s moves give us real hope, but there is simply no way that the structural change the world needs will be handed down by the leaders of the richest countries in the world, as this week’s philanthropy photo op will show. As well as generating the sort real popular movements we’ve seen around calls for a ‘People’s Vaccine’ – we also need to overturn everything the G7 stands for: a coup against a more democratic international order.

Had the world listened to the calls for change in the 1970s – for corporate regulation, control of finance and just trade rules – we would not have embarked upon three decades of free market fundamentalism which have brought economy and environment to a breaking point. We can’t allow a bit more philanthropy on the part of the richest to distract from the really big change we need.

And had the world listened to South Africa back in February, and got the world behind the patent waiver, some of the million people who’ve since died of Covid-19 might have been saved. As South Africa told the WTO:  ‘Irrespective of the amount of money any  donor country may throw at the problem, the model of donation and philanthropic expediency cannot solve the fundamental disconnect between the monopolistic model it underwrites.’

The lessons of vaccines apply to the economy more widely. Monopoly capitalism is killing us. We need real change, and that change won’t come from the G7.

News: ‘Far too low’: Tax justice campaigners push back against the G7’s 15% minimum tax-rate pact
The world’s richest countries have finally agreed in principle to the idea of a global minimum corporate tax rate—a step that could signal a conclusion to...
Blog: A corporate tax reset by the G7 will only work if it delivers for poorer nations too
G7 negotiations for a global minimum corporate tax rate offers the opportunity for a transformational shift in responses to the pandemic, explains Alex...
Blog: Leading Astronauts make a call to Earth ahead of the G7 summit - urging international cooperation for the sake of people and planet
Leading Astronauts from the USA, Japan and South Korea have joined forces in a new short film targeting G7 leaders, who meet this weekend in Cornwall, UK.
News: G7 climate commitments judged too weak to bag COP26 success
Green groups say a lack of fresh finance to help developing countries adopt renewable energy and adapt to a warmer planet threatens key climate talks in...
Blog: The G7 must act to end ‘vaccine apartheid’ or everyone in the world will suffer
The pandemic has uncovered unpalatable truths about global injustices and inequalities. We are challenged to see health as a universal common good, not a...
Printer-friendly version