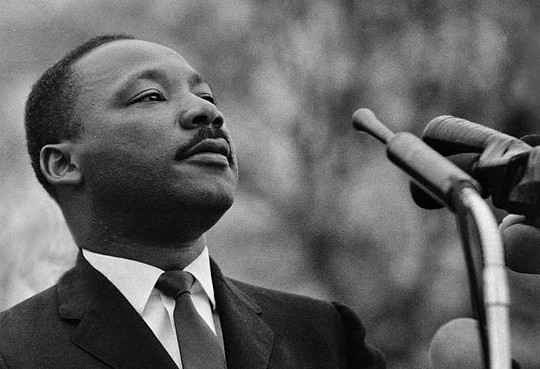 If MLK lived today, he would not be celebrated for staunchly opposing wealth inequality and poverty, or for his Poor People's Campaign that demanded a better life for all Americans through nonviolent protest and mutual aid. By Holly Genovese for OpenDemocracy.

As we mourn Martin Luther King Jr. and celebrate his life, we must remember that he was violently assassinated. His ideas were seen as radical and dangerous. He critiqued liberals and moderates and did not have the approval of most Americans. So what if we instead celebrate King as a leader who gave his life to a movement focused on Black people, on poor people, on labor activism and anti-war sentiments. What if we celebrate King as he was: a radical?

King was a critic of the Vietnam War and a supporter of workers’ rights. He was a formerly incarcerated gun-owner, stalked by the FBI, accused of communist leanings though he loudly critiqued the Communist Party, and was staunchly opposed to wealth inequality and poverty. If he lived today, he would not be celebrated for these beliefs, at least not in the mainstream. By celebrating a sanitized image of King, filled with out-of-context quotes and vague ideas about peace, we disrespect his legacy and all that he worked for. Yes, King believed in nonviolent resistance. But like all people, his ideologies and beliefs changed over time. His ideas about what constituted resistance were complex, disruptive, and often ended in violence by the opposition.

King’s method of nonviolent resistance was a political tactic, designed to showcase the violence of white opposition throughout America’s South. Nonviolent did not mean nondisruptive – from the march to Montgomery on the Edmund Pettus Bridge to King’s support of the sanitation workers’ strike in Memphis, King’s ideology relied on the disruption of capitalism, of transportation and of everyday life. As conservatives co-opt King’s lineage and ask ‘What would King think?’ after every protest of police violence, they further the myth that what King did was easy, was accepted, and did not disrupt or inconvenience the lives of white people. This couldn’t be further from the truth.

Not only did King fight for civil rights, but he also argued for a Universal Basic Income and the creation of a ‘nonviolent army of the poor’ through his poor people’s campaign, continued by his wife after his assassination. The platform of King’s Poor People’s Campaign involved a demand for a $30bn dollar investment in a ‘real war on poverty’ – a direct critique of democratic president Lyndon Johnson’s Great Society programs. He also wanted a guaranteed annual wage for all Americans and the building of quality low-cost housing across the United States. To contend with King’s legacy and beliefs, we have to acknowledge that many of them centered around poverty.

Ironically, some of the best evidence of King’s radical ideas comes from the FBI’s counterintelligence program (COINTELPRO), led by J. Edgar Hoover, which followed King for years and suspected him of communism. In a 1966 Gallup Poll, King’s approval rating was at 33%. This dismantles the idea that King had universal support at the time of his activism.

By co-opting King’s public image, conservatives (and liberals, too) can align themselves with historical civil rights battles while ignoring ongoing issues of labor rights, police violence and the housing crisis in most major cities across the US. They can volunteer at ‘non-political’ events on Martin Luther King Day, when disruption, protest and mutual aid were central to King’s ideology. Not charity. Not peace. As was the protest of unjust laws. King wrote: “there are two types of laws: just and unjust… one has a moral responsibility to disobey unjust laws.” This commitment to disobedience above all, and to equitable access to housing, living wages, and justice for Black Americans in particular, is what we should celebrate when focusing on King’s legacy.

Article: MLK Global 2018: Internationalising the poor people’s campaign
People across the Global South and economically marginalized people in the North are increasingly aware of the need to organize, agitate for and advance a...
Report: End austerity – and kickstart Martin Luther King’s revolution of values
Fifty years ago, at New York’s Riverside Church, Martin Luther King made a passionate plea for a more equal, more just, more peaceful and more dignified...
Event: Poor People's Campaign: US nationwide moral direct actions!
On May 14, the Poor People's Campaign will launch its first nation-wide event of the season with nonviolent moral direct actions in over 30 state capitals...
Event: Mass Poor People's Assembly and Moral March on Washington
The Mass Poor People’s Assembly and Moral March on Washington is going digital! People will gather for an online programme from all 50 U.S. states and...
Page: Join our campaigns for Article 25
Find out more information about our current campaigning initiatives and events. You can sign up to join us on demonstrations for Article 25; download...
Printer-friendly version