Demonstrations matter – they create the kind of power politicians despise 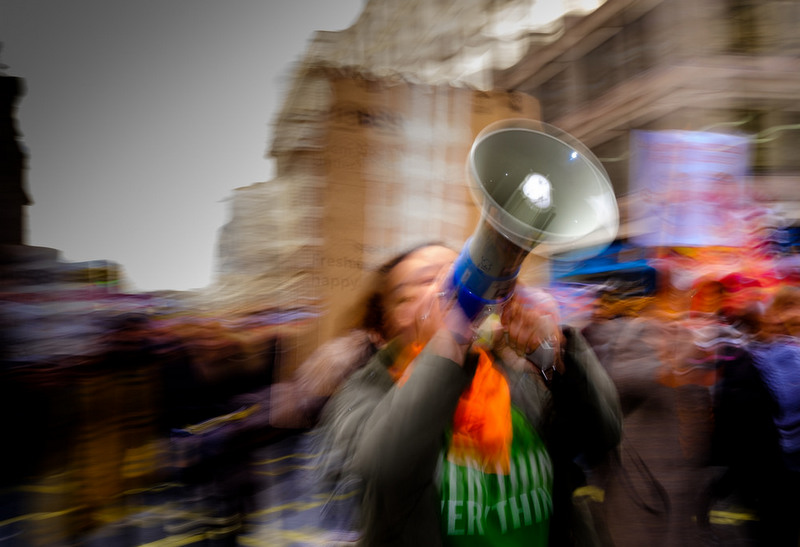 The point is not that ‘mass action works’ – it rarely does, on its own. But mass gestures of peaceful protest create their own dynamics that can be massive and far-reaching, writes Paul Mason.

The tide is turning and you can feel it on the streets of the world’s capital cities. On Sunday, hundreds of peaceful protesters were arrested in Moscow and St Petersburg, after thousands massed in unsanctioned demonstrations against corruption. There were similar scenes in Minsk, where punitive taxes on the unemployed have driven people to the streets. In February, half a million Romanians forced their government to abandon a law pardoning corrupt officials, by taking to the streets.

In Britain, in the month of March, three major protests have taken place: a demo to save the NHS that drew up to 250,000 people; a 30,000-strong march against racism; and, on Saturday, a protest in favour of staying in the EU, again numbering more than 100,000 people. And when Donald Trump’s repeal of Obamacare failed in Congress, although the blow was struck by rebel Republican lawmakers, the force behind it surely came from the thousands of people who swarmed into town hall meetings to berate their representatives in the runup to the vote.

The point is not that “mass action works” – it rarely does, on its own. The point is that it’s not futile. Putting your body on to the street, or into a mass meeting, or getting it thrown into a police van – as happened to hundreds of Russians and Belarusians this weekend – creates power of the kind professional politicians despise.

If you want to understand how irked the political class feels when people exercise their right to protest, study the Twitter feed of MP Owen Smith. The one-time Labour leadership contender didn’t join the Save the NHS demo – but he did find time, at the very moment a quarter of a million people were on the streets – to belittle them. He tweeted to a follower: “Is that how we save it then? With a march? I always thought it was better to win elections and then fund it properly.” Brief though it is, Smith’s tweet encapsulates an entire political philosophy. The people who ignored Smith’s advice and marched for the NHS understood what the closeted technocrats do not. Mass action creates its own dynamics; they can be massive and far-reaching – despite the scant and bland coverage all demos get on TV and in the press.

In the first place, assembling in a large crowd shows you that you are not alone. And it informs you in great detail about the kind of people you are not alone with. On the NHS demo, it was obvious that huge numbers of NHS workers had turned out, alongside user groups often led by elderly people. Why is that interesting? Because in the modern, privatised and corporatised NHS, the staff are afforded few collective outlets for expression. Coming together – not just as “nurses from Doncaster” but nurses, doctors and patients from Doncaster – breaks down the invisible walls institutional life creates.

On Saturday’s Unite for Europe march, it was – by all accounts – the liberal salariat that predominated. A lot of sarcasm has been aimed that way by the Labour left and the media right but, again, such mass gestures are about finding each other, testing out arguments, and creating and transforming messages. If you add to all this the experience of resistance to Trump in the US, the global picture becomes interesting. On 21 January the US experienced possibly the biggest mass mobilisation in its history – with an estimated 4.2 million people protesting against Trump’s inauguration in towns and cities across America.

What social media adds to such mobilisations is not just visibility but the intensification of the shared experience. Each block of 1,000 protesters on any demo in the developed world is really a thousand nodes on a network containing tens of thousands of other nodes. It is a moving and incessant information-distributing machine. And that is why the first move of any government that wants to curtail democracy is to curtail the right to demonstrate. Putin outlawed the majority of planned demos last weekend, but they went ahead regardless. Slammed into the police vans were not just brave but faceless Russians, but people with Facebook and Twitter followers all over the planet.

That’s why demonstrations matter and why, in the name of resisting the growing kleptocracy, racism and authoritarianism of political elites, we should keep on demonstrating. But demonstrations are never enough. Just as 30,000 people on the streets usually merits only a colourful picture and a caption in the newspaper, what they did afterwards is barely recorded at all. This is why revolts and revolutions always surprise elites, and a media conditioned to see the world through the elite’s viewfinder.

“When the people decide to live …” wrote Tunisian poet Abu al-Qasim al-Shabi, “chains will be broken”. Those words were widely shared in 2011 during the Arab spring. Revolts happen because elites push things so far that large numbers of ordinary people conclude there is no other option but to resist.

You can do some things at the ballot box: the defeat of Geert Wilders in the Netherlands, the humbling of Paul Nuttall in Stoke-on-Trent and – hopefully – the defeat of Marine Le Pen in France on 7 May. But some challenges require you to don a pink hat, or – as the Russians did – hang a designer sports shoe around your neck, paint an amusing sign, march, take pictures and tweet them to your friends. When the people decide to live, demonstrations are what they do: and there’s a lot of people demonstrating it as spring gets under way.

Article: The cry for justice
As the economic crisis worsens, the foremost responsibility of governments is to redesign our political and economic systems so that no-one dies of hunger...
News: A new era of global protest
As a new era of mass public protest grows in response to social, economic and political injustice across the world, STWR's July newsletter highlights some...
Article: The power of protest tactics: ‘just do it’
Filmmaker Emily James spent a year documenting the secretive world of environmental direct action, delving into the motivations, creativity and...
Printer-friendly version