Calls for a ‘restorative economy’ encapsulate the growing debate on sharing 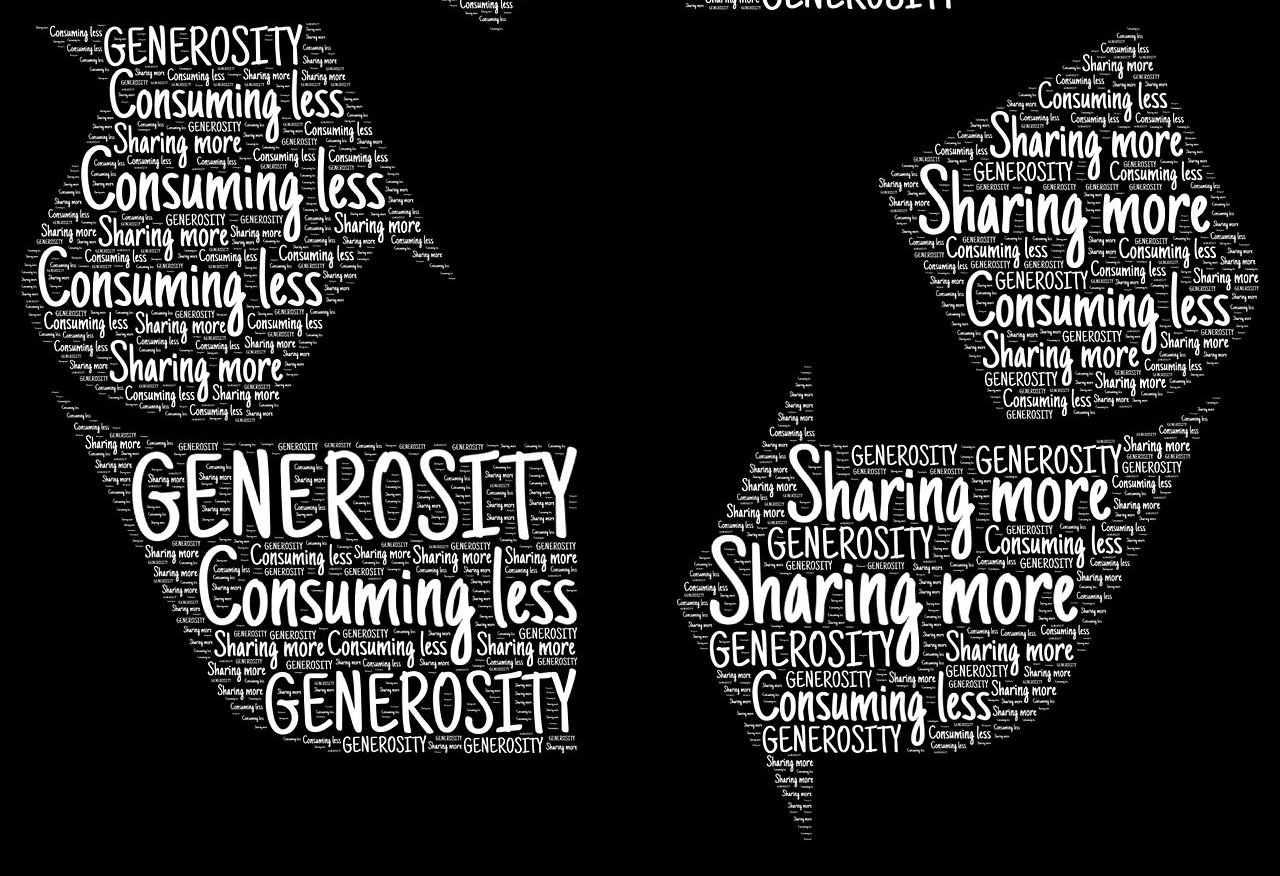 A new report calling for a ‘restorative economy’ seeks to stimulate a much needed debate about how we can create a fairer, more sharing-oriented society in the UK and globally. Launched as part of Tearfund’s Ordinary Heroes campaign, the report advocates for a drastic change in economic direction if a decent standard of living is to be extended to everyone on the planet, as well as future generations.

Recognising the significant achievements of our current model of development, the report succinctly outlines the biggest problem that still remains: that the high resource-consuming lifestyles of affluent citizens in the West cannot be replicated globally, and are already placing an untenable strain on finite resources and environmental systems. These escalating patterns of unsustainable development are hitting the poorest hardest, and will require a significant reduction in consumption of key resources within high-income countries if everyone on Earth is to be allowed their fair share.

Following from this analysis, the report argues that a restorative economy must achieve three fundamental aims: to ensure that we live within environmental limits; that everyone is able to meet their basic needs throughout the world; and that inequality is kept within reasonable limits (both within and between countries).

This essential framing is perhaps nothing new, and has been deftly outlined by various other charities such as Christian Aid in their work on ‘equity in a constrained world’ or Oxfam’s discussion paper on ‘living inside the doughnut’. But this latest report by the Christian development NGO Tearfund – the outcome of a six month discussion process with various experts and well-known civil society organisations – is unique in how it investigates what our 21st century economy might look like if organised around the biblical idea of ‘jubilee’.

Part 3 of the report explains how the idea of jubilee goes far beyond debt cancellation, and also entails notions of sufficiency, environmental restoration, and the need for nature to rest. During each Jubilee year – a festival that Israelites were supposed to observe every 49 or 50 years – all debts were to be forgiven, no crops were to be sown, liberty was declared throughout the land (including for slaves), while land ownership was ‘reset’ with houses and fields returned to their original owners.

A reboot of wealth redistribution

The report authors describe this as effectively a reboot of wealth distribution in the agrarian context of the time, one that was specifically designed to reduce inequality and provide equality of opportunity. They go on to cite passages from the New Testament that reveal how Jesus’ ministry was concerned with embedding jubilee principles on an ongoing basis, to prevent wealth imbalances from building up in the first place.

A chapter is devoted to the need for a grassroots social movement on a much bigger scale than anything we’ve seen in recent years, which is also dependent on developing a shared ‘story’ that speaks to our times. The new kinds of story we need must help us to think in terms of a larger us (recognising that we are 7 billion people who are more interdependent than ever before); a longer future (in truly intergenerational terms); and a better ‘good life’ (“not just focused on consumerism but having a more fundamental sense of purpose and belonging in the cosmos”).

The report further recognises that “change starts with our lifestyles”, and a passionate movement for economic transformation must not only demand but also live out the change they want to see in the world. This leads to five key areas that everyone is compelled to think about, beginning with the challenge to “live within our fair share of the world’s resources and environmental limits”. This is to act upon the recognition that rich countries like Britain are currently consuming about three times their fair share of global energy and resources, which behoves almost every British citizen to shrink their personal carbon footprint by, for example, consuming less and aiming towards a ‘zero waste home’. Further individual actions that we can all take are summarised in terms of responding to poverty and inequality with ‘radical generosity’; speaking out prophetically (through creative and passionate protest); using our power as a voter, citizen and consumer; and living ‘restoratively’ and prioritising social relationships.

The final chapter of the report sets out ten big, transformative policy ideas that could help to bring about a restorative economy in line with jubilee principles. Some of these reflect the kind of changes envisioned by Paul Hawken, who originally came up with the concept of a restorative economy that imitates the efficient practices of nature. Two key ideas in the Tearfund discussion paper are to create both a circular and zero-carbon economy in the UK, with a number of specific policy recommendations towards that end. The overall mix of policy ideas are mostly topical and extremely progressive within the current UK political context – such as the call for a land value tax, a major reform to the way in which money is created, and a far-reaching rebalancing of the tax system.

Many of the other policy ideas reflect the need for ‘fair shares’ in wealth and resource allocation on a global as well as a national level. This includes the proposal to tackle international tax avoidance by exploring the possibility of a unitary tax, as well as the recommendation that rich countries create a new global fund to help finance a global social protection floor.

More radically, the authors apply the biblical idea of jubilee to the atmosphere as well as to land, whereby the sky itself is recognised as part of our common inheritance that belongs to everyone equally. In policy terms, this may require allocating everyone their own ‘share of the sky’ on a per capita basis, with countries’ allocations in proportion to their population. Such an idea – based on the ‘contraction and convergence’ concept devised by the Global Commons Institute – could provide a workable and fair framework for resolving the current impasse in UN climate change discussions, if only it is accepted and applied by all governments.

One of the more controversial recommendations in the report from the perspective of many campaigners and activists is to “double food production and halve resource intensity with a 21st-century Green Revolution”. As became clear during the Enough Food for Everyone IF campaign launched in 2013, such proposals to increase agricultural productivity through “private sector investments and partnerships” in sub-Saharan Africa say nothing about the corporate control of food being one of the major causes of hunger. This position also fails to make any reference to food sovereignty or the importance of agro-ecology as a viable alternative to the current system of agriculture, despite this being the established framework developed by farmers movements and experts for addressing the global food crisis.

However, the new report by Tearfund is a valuable contribution to the debate on sharing that is becoming ever more prominent among civil society organisations and concerned citizens. Many progressive thinkers are talking about the need for a new story that can enable us to understand and overcome our present civilisational crisis, and the biblical concept of jubilee – which in many ways encapsulates the principles of sharing and equality – is a useful lens that can help bring these complex political issues to life. This may be especially true for those of a Christian or religious persuasion, although the concept is useful for anyone who wants to bring about a collective shift in our values and help build a huge grassroots movement that pushes for transformative change.

In this light, the allied concept of a restorative economy (as defined by Tearfund) also provides a constructive framework that can help us to debate the many changes that are necessary to share wealth, power and resources more fairly and sustainably, both as individuals and as a global society.

Blog: A new social settlement for a sharing society
The latest phase of research from the New Economics Foundation proposes a new framework of ideas that are all premised on the need for a more equal and...
Article: Editorial: Growing calls for sharing and justice
As part of STWR’s ‘global call for sharing’ campaign, our latest editorial highlights how recent protest and campaigning activity is invariably focused on...
Blog: Oxfam’s latest bombshell on how unequally the world’s wealth is shared
Twitter feeds and newspaper headlines were again dominated this morning by new statistics on growing wealth inequality, as released by Oxfam ahead of this...
Blog: Heeding Christ’s teaching to share in the 21st century
To address the epochal challenges of the twenty-first century, we will have to heed Christ’s simple message like never before—and finally share the world’...
Article: Sharing as the new common sense in a post-growth world
We need to talk a lot more about sharing as a way to radically reframe the post-growth debate, argues a recent report from the Green House. If growthism...
Printer-friendly version