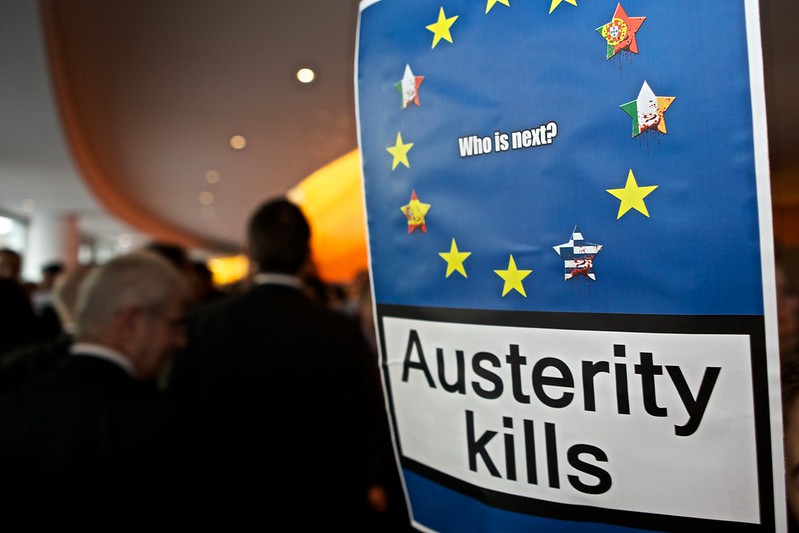 Austerity and budget cuts do not need to be “the new normal”. Governments can find additional fiscal space to fund public services and development policies through at least eight options, all of which are endorsed by the United Nations. By Isabel Ortiz and Matthew Cummins for IPS news.

While this week Ministers of Finance and economists meet in Washington to confront global economic challenges at the IMF and World Bank Annual Meetings, the majority of the world population lives with austerity cuts and see their living standards deteriorating. World leaders must reverse this trend.

Since 2010, most governments in both high income and developing counties have been implementing austerity policies, cutting public expenditures. Surprisingly, this trend is expected to continue at least until 2024, according to a global study just published by the Initiative for Policy Dialogue at Columbia University, global trade unions and civil society organizations. Austerity has become “the new normal.”

Based on IMF fiscal projections, the study finds that a new fiscal adjustment shock will start in 2020. By 2021, government expenditures as a share of GDP will be declining in 130 countries, nearly three-fourths of which are in the developing world. The reach of austerity is staggering: nearly 6 billion persons will be affected by 2021.

How are governments cutting their budgets and implementing austerity reforms? In practice, the most commonly considered adjustment measures in 2018-19 include: pension and social security reforms (in 86 countries); cutting or capping the public sector wage bill, including the number and salaries of teachers, health workers and civil servants delivering public services (in 80 countries); labor flexibilization reforms (in 79 countries); reducing or eliminating subsidies (in 78 countries); rationalizing and/or further targeting social assistance or safety nets (in 77 countries); increasing regressive consumption taxes, such as sales and value added taxes (in 73 countries); strengthening public-private partnerships (PPPs) (in 60 countries); privatizing public assets/services (in 59 countries); and healthcare reforms (in 33 countries).

All of these measures have negative social impacts. As a result, in many countries older persons have lower pensions; there are not sufficient teachers, medical and care staff, and the quality of public services suffers; there are less jobs, and people work under more precarious conditions; prices increase while wages are stagnant; and the low and middle classes are squeezed and under pressure.

In perspective, the macroeconomic and fiscal choices made by governments over the last decade are alarming. The G20 alone committed US$10 trillion to support the financial sector in response to the global financial crisis, and then passed the costs of adjustment to populations, with millions of people being pushed into poverty and lower living standards.

The worldwide drive toward austerity or fiscal consolidation can be expected to aggravate the growth and employment crisis and diminish public support at a time of high development needs, soaring inequalities and social discontent.

Austerity is also being used as a trojan horse to induce “Washington Consensus” policies to cut back on public policies and the welfare state. Once budgets are contracting, governments must look at policies that minimize the public sector and expand private sector delivery, including PPPs. There are clear winners and losers from this renewed Washington Consensus, and governments must effectively assess and question these policies.

Austerity and budget cuts do not need to be “the new normal.” There are alternatives, even in the poorest countries. Governments can find additional fiscal space to fund public services and development policies through at least eight options, which range from increasing progressive tax revenues, cracking down on illicit financial flows, improving debt management and using fiscal and foreign exchange reserves, to adopting more accommodative macroeconomic frameworks, reprioritizing public expenditures and -for lower income countries- lobbying for greater aid. All these options are endorsed by the United Nations and the international financial institutions.

It is time for world leaders to abandon the myopic scope of macroeconomic and fiscal policy decisions that benefit few and, instead, look for new fiscal space and financing opportunities to foster a robust global recovery and the achievement of long-term global prosperity for all.

Isabel Ortiz is Director of the Global Social Justice Program at Joseph Stiglitz’s Initiative for Policy Dialogue at Columbia University, former Director at the International Labour Organization (ILO) and UNICEF, and senior official at the UN and at the Asian Development Bank.

Matthew Cummins is senior economist who has worked at UNDP, UNICEF and the World Bank.

Filed under:
Inequality, Finance and debt

News: Nearly two-thirds of children lack access to welfare safety net, risking ‘vicious cycle of poverty’
More than six in 10 children globally lack access to social protection, leaving them particularly vulnerable to falling into chronic poverty, reports the...
Article: Is a ‘global social floor’ the right path for ending poverty?
An internationally coordinated effort to secure universal social protection may not address the structural factors which make people vulnerable to poverty...
Article: Social justice for the sustainability of life: on the need for a global social pact
We now need transformative policies able to open a new horizon, without poverty, with less inequality, without destroying our natural environment. Our new...
Blog: A shared society has to offer hope, opportunity and social justice not fear, inequality and austerity
A genuinely “Shared Society” requires the redistribution of power, wealth and income. But there is no value in sharing austerity, inequality and hardship...
Printer-friendly version