Why Congress must vote on the United States’ role in Yemen 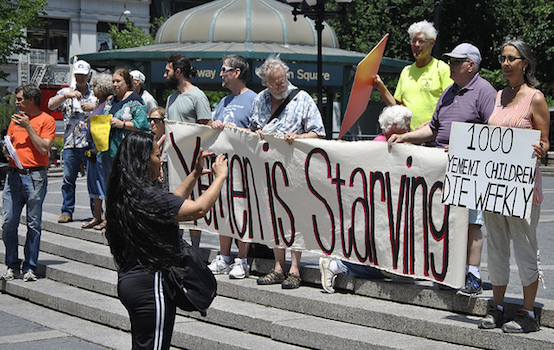 Few Americans know that the U.S. military is making the crisis in Yemen worse by helping one side in the conflict bomb innocent civilians. We believe that since Congress has not authorized military force for this conflict, the U.S. government should play no role in it beyond providing desperately needed humanitarian aid, writes Mike Lee, Bernie Sanders and Chris Murphy.

In Yemen, a child under the age of five dies of preventable causes every 10 minutes. That is just one startling fact from a country that has been torn by war for nearly three years.

More than 10,000 civilians have died and over 40,000 have been wounded in this war. Fifteen million people can’t access clean water and sanitation. An estimated 17 million people – 60 percent of the total population – do not have reliable access to food and are at risk of starvation.

When tragedies such as the war in Yemen occur, the American people’s instinct is to help. Americans have so far provided more than $768 million in humanitarian aid to that country.

What few Americans know, however, is that the U.S. military is making the crisis worse by helping one side in the conflict bomb innocent civilians. The millions we have spent in humanitarian aid were necessitated, in part, by a U.S. government failure.

In order to understand this failure, we need to understand how the United States got involved in Yemen to begin with. In March 2015, a coalition of Arab forces led by Saudi Arabia launched a military interventioninto Yemen.

The goal of this intervention was to support the government of President Abed Rabbo Mansour Hadi against Houthi insurgents who had taken control of much of the country, including the capital city of Sanaa.

The Obama administration, without consulting Congress, quickly authorized U.S. military forces to provide “logistical and intelligence support” to the Saudi coalition. U.S. military support for this intervention continues to this day. U.S. forces are coordinating, refueling and targeting with the Saudi-led coalition, as confirmed last December by Defense Secretary Jim Mattis .

We believe that since Congress has not authorized military force for this conflict, the United States should play no role in it beyond providing desperately needed humanitarian aid.

That is why we are introducing a joint resolution that would force Congress to vote on the U.S. war in Yemen. If Congress does not authorize the war, our resolution would require U.S. involvement in Yemen to end.

The Framers gave the power to declare war to Congress, the branch most accountable to the people. Article I, Section 8 of the Constitution states in no uncertain terms that “Congress shall have power to . . . declare war.”

It is true that the president may order military operations in limited emergency situations, such as foreign invasions. But the far-off civil war in Yemen, while tragic, is not an emergency.

Under the War Powers Act of 1973, the assignment of a member of the United States armed forces to “command, coordinate, participate in the movement of, or accompany” another country’s military during a war constitutes the introduction of the United States into a conflict. Congress has not authorized these combat activities. Under the 2001 Authorization for the Use of Military Force (AUMF) issued after the 9/11 attacks, any U.S. military action in Yemen must be limited and only directed against groups affiliated with al-Qaeda, such as al-Qaeda in the Arabian Peninsula (AQAP) and ISIS, also known as the Islamic State. Engaging in a war against Yemeni Houthi rebels does not qualify.

Indeed, U.S. involvement in the Yemen war has proven counterproductive to the effort against al-Qaeda’s affiliates. The State Department’s Country Reports on Terrorism for 2016 found that the conflict between Saudi-led forces and the Houthi insurgents had helped AQAP and ISIS’s Yemen branch to “deepen their inroads across much of the country.” Furthermore, while Iran’s support for Houthi insurgents is of serious concern for all of us, the truth is that this war has increased, not decreased, the opportunities for Iranian troublemaking.

The most serious duty we have as U.S. senators is deciding whether and when to send our young women and men into harm’s way to defend our country. That is why we are proud to introduce this bipartisan resolution together. Since 9/11, politicians have become far too comfortable with American military interventions all over the world. It is time for Congress to play its constitutionally mandated oversight role with regard to war.

Filed under:
Poverty and hunger, Corporate power, War and conflict

News: The people of Yemen are being subjected to deprivation, disease and death as the world watches
In a statement to the Security Council, the head of the UN's Office for the Coordination of Humanitarian Affairs (OCHR) urges the international community...
News: Yemeni children are trapped in 'worst humanitarian disaster in modern history'
Nearly four out of five children in Yemen are now in need of immediate humanitarian assistance, leading humanitarian groups announced in a joint statement...
News: Famine may be unfolding 'right now' in Yemen, warns UN relief wing
The United Nations relief wing on Friday warned of famine-like conditions unfolding in Yemen, as a blockade on aid and other essential goods by a Saudi-...
Report: At least one in four children live in poverty in the Middle East and North Africa
According to a recent UNICEF analysis covering 11 countries in the Middle East and North Africa[1], poverty continues to impact at least 29 million...
Printer-friendly version