The time has come to rename "Aid" 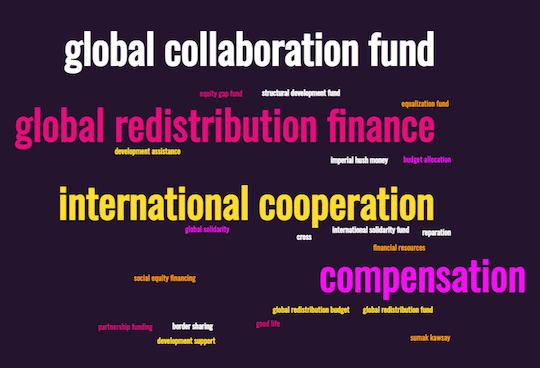 Join eighteen organizations and key individuals working in the global justice sector across nineteen countries in ditching the word “aid” and replacing it with more accurate alternatives in our communications. By Health Poverty Action.

Following a consultation to replace the damaging and neo-colonial  language of “aid” - run across thirteen countries by the Track Changing group of the Kampala Initiative - activist organizations have pledged to replace the word “aid” with “Global Redistribution” or one of four alternatives (Global Solidarity; Global Equalization; Global Equity Gap; Global Collaboration).*

Whilst we recognise that we occasionally need to use the term “aid” to describe the current status quo, we commit to replacing it, wherever possible to better represent the relationship between the Minority and Majority worlds and more accurately describe the causes of poverty.

Hamimu Masudi, Co – Chair of the Track Changing Group of the Kampala Initiative said: “Like Nelson Mandela taught us, “Overcoming poverty is not a task of charity, it is an act of justice. Poverty and inequality are a result of historical legacies and a defective global economic order that uses its unfair rules to prey on and rig the Majority world out of the global economy. When used widely at all levels alternative names such as, ‘Global Redistribution’ has the potential to direct attention towards structural causes of poverty that the aid language undermines.”

Igbine Lizzy Nneka, campaigner and member of Track Changing Initiative said: “It’s time to call a spade a spade. We want to see a new narrative that tells the truth about poverty, inequality and poor health, that rebalances power, overcomes racist and colonially rooted stereotypes and that encourages people to take action worldwide in solidarity with one another”

Organisations and individuals who communicate about international issues to join us and pledge to use the alternative words in their communications.

Why these alternative names?

These new terms help to expose global inequalities and redefine how to mobilize for change. They contribute towards a narrative that; redefines poverty – not as a failing of the poor but rather a systemic and created injustice.

They support our demands that in order to address global poverty, inequalities and poor health, corporates must pay their fair share of taxes; aid institutions must change their mandate to that of addressing global inequalities; and governments must rethink debt conditions, climate change and insecurity – because these are the real drivers of global poverty, poor health and inequities.

*The words “fund” or “finance” or “budget” can be attached at the end as appropriate.

Article: Aid in reverse: how poor countries develop rich countries
New research on global financial flows shows that the usual development narrative has it backwards; aid is effectively flowing in reverse. And some of the...
Report: Towards a rights-based economy: Putting people and the planet first
A joint report by the Center for Economic and Social Rights (CESR) and Christian Aid asks a radical question: what would it look like if we had an...
Blog: Christian Aid’s renewed focus on sharing
Of the many and varied examples of organisations, professionals and engaged citizens across the world that call for greater sharing in our societies, here...
Article: Buzzwords and tortuous impact studies won't fix a broken aid system
Fifteen leading economists, including three Nobel winners, argue that 'aid effectiveness' projects might yield satisfying micro-results, but they...
Printer-friendly version