Home truths about the climate emergency 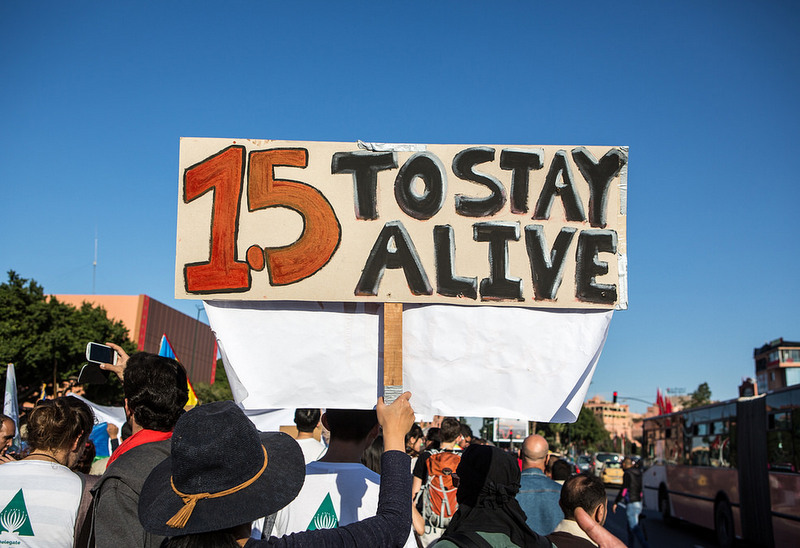 COP22 again highlighted the mismatch between illusive policymaking and the stark reality of global warming. As always, it was left to civil society groups to uphold a vision of global cooperation and economic sharing as the only path towards a sustainable future.

As 2016 draws to a close, we appear to be living in a world that is increasingly defined by its illusions, where the truth is a matter of subjective interpretation or argumentative debate. Indeed, following the United States election and Brexit referendum there is much talk of a new era of post-truth politics, in which appeals to emotion count more than verifiable facts. But there are some facts that cannot be ignored for much longer, however hard we may try. And the greatest of all these facts is the escalating climate emergency that neither mainstream politicians, nor the public at large, are anywhere near to confronting on the urgent scale needed.

This was brought home once again at the latest Conference of the Parties held in Morocco last month, following the so-called ‘historic’ Paris Agreement of November 2015. Dubbed the ‘implementation’ or ‘action COP’, the main purpose of the summit was to agree the rules for implementing the new agreement, as few countries have set out concrete plans for how they will achieve future emissions reductions post-2020. Far from justifying its nickname, however, the almost 200 nations participating in COP22 decided that the overarching goals and framework for international climate action will not be completed until 2018, with a mere review of progress in 2017.

Before the talks even commenced, the latest ‘emissions gap’ report from the UN Environment Programme (UNEP) highlighted the continued divergence between political and environmental/scientific reality. According to UNEP’s analysis, the non-binding pledges made by governments in Paris could see temperatures rise by 3.4°C above pre-industrial levels this century, far beyond the 2°C considered a minimally safe upper limit. To hit the more realistic 1.5°C target—which in itself will only mitigate, rather than eliminate severe climate impacts—the world must dramatically step up its ambition within the next few years before we use up the remaining carbon budget.

Yet this reality was not even a key focus of the COP22 discussions, where most delegates from developed countries spoke mainly of their post-2020 commitments, as if the deadline for an emergency mobilisation of effort can be postponed by another few years. Ironically, several developed countries have not even ratified the second commitment period of the Kyoto Protocol, which comprises the pre-2020 period. So after 24 years of negotiations, we are still heading towards a future that is “incompatible with an organised global community”, with no sign that the mismatch between rhetoric and action is near to closing.

As always, it was left to civil society groups to uphold the real hope and vision for how nations can begin traversing a path towards 1.5°C. In an updated report for COP22, a coalition of campaigning organisations outlined the last chance we have of halting our race to environmental disaster, which will require massive emissions reductions before 2020 and major shifts in the real economy. All of these transformations are technically viable and economically practicable, despite their apparent political infeasibility—such as a fossil energy investment and development moratorium; a necessary shift to agro-ecological farming practices; and a planned global transition to 100% renewable energy.

What remains central to achieving an effective programme of action, however, is a degree of international cooperation and economic sharing that is unprecedented in human history. Such is the implicit message of both the 2016 and 2015 civil society equity reviews, which give a compelling justification for integrating the principle of ‘fair shares’ into a global effort-sharing framework. Using an equity modelling approach based on domestic mitigation pledges and indicators for capacity and historical responsibility, the reports show how developed countries are offering a share of effort that is markedly less ambitious than developing countries.

Moreover, both reports demonstrate how developed countries have fair share obligations that are too large to be fulfilled solely within their own borders, even with extremely ambitious domestic actions. So there is a moral, political and economic case for the wealthiest nations to vastly scale up their help to poorer countries in terms of international finance, technology sharing, and capacity-building support.

Put simply, campaigning organisations have used the most up-to-date scientific data to back up the argument that there cannot be hope for limiting global warming unless the principles of sharing, justice and equity are operationalised in a multilateral climate regime. But it is also an argument based on common sense and fundamental notions of fairness, given the urgency of drastically cutting global emissions within the context of interdependent nations at starkly disparate levels of economic and material development. As the civil society review for COP22 concludes, reiterating a basic truth of the climate justice movement: “Many of the changes needed to address the climate crisis are also needed to create a fairer world and better lives for us all. …Climate change affirms the urgency and necessity to shift to an equitable and just pathway of development.”

Of course, there is no sign that those countries with a higher capacity to act than others are facing up to their obligations to redistribute massive technological and financial resources to developing countries, thus enabling them to leapfrog onto rapid, low-carbon development paths. Activists at COP22 used the slogan “WTF?” to ask “Where’s The Finance?”, as only between $18 billion and $34 billion has been granted of the $100 billion per year that developed countries committed to find by 2020. A supposed “$100 Billion Roadmap” from the OECD was roundly debunked by both developing countries and civil society for using misleading numbers and various accounting tricks. All the while, new analysis shows that the true needs of the world’s poorest countries is in the realm of trillions of dollars, if they are to plausibly meet their Paris pledges by 2030 and help avoid catastrophic warming. But no increases in public financial contributions were forthcoming in Morocco, pushing any substantive decisions on the issue back for another two years.

So once again, we are left to wonder at the mismatch between illusive policymaking and the stark reality of global warming. 2016 broke all previous records for being the hottest year, while military leaders warned that climate change is already the greatest security threat of the 21st century, potentially leading to refugee problems on an unimaginable scale. Yet developed countries continue to evade and postpone their responsibilities for mobilising an appropriate response, while often making decisions on national infrastructure and energy that directly contradict their putative climate change commitments. Whether or not the United States withdraws from the Paris accords or the United Nations Framework Convention on Climate Change (UNFCCC) altogether, the prospect of global carbon emissions beginning to decline before 2020 currently remains dim, to say the least.

Still none of this changes the core reality, which has remained the same ever since the UNFCCC negotiations began in the early 1990s. For there can be no hope of real and meaningful progress on tackling climate change, without a major commitment to North-South cooperation based upon a fairer sharing of global resources. The simple truth is unavoidable, but time is running out before the world finally embraces its momentous implications.

Report: Cooperation key to solving climate crisis
A new report from a diverse coalition of civil society organisations reveals what governments must do immediately to achieve goals of Paris Agreement,...
Article: Climate change could drive 122m more people into extreme poverty by 2030
The UN's 2016 State of Food and Agriculture report warns that without measures to halt and reverse climate change, food production could become impossible...
Article: The climate deal sham: only sharing can break the deadlock
The recent climate talks in Doha were held as if in an alternative reality to distressing developments across the world. But there still remains hope and...
Article: Global climate justice movements refuse to be overshadowed by election of climate change denier to U.S. presidency
The following collective statement was issued by organisations, networks, and movements gathered in Marrakech at COP22, in response to Donald Trump...
Report: The intersection of politics and spirituality in addressing the climate crisis
The following interview with STWR’s founder, Mohammed Sofiane Mesbahi, examines both the contemporary political and profounder spiritual implications of...
Printer-friendly version